As I was collecting reliability data for several PKI systems, I included Let’s Encrypt as it’s by far the biggest PKI system I was aware of. It provides its status data and its history at https://letsencrypt.status.io and here’s my analysis of its production systems.

While Let’s Encrypt publishes data of all its incidents, it is rather vague in terms of the impact of particular incidents. There is little information like a fraction or an actual number of failed requests, who were the impacted users, or if a particular event was limited to a certain geographical region. Despite this shortcoming, the results presented here represent a rather interesting peek behind the curtain of a hugely successful online service and I welcome any comments to further improve its accuracy.

Another reason why I wanted to look at the reliability of Let’s Encrypt certificate issuance was to find out, whether there’s a good enough reason to use an independent / external monitoring service. I advocate the use of our https://keychest.net service (an HTTPS/TLS monitoring service with automated certificate discovery) as it detects failures of certificate renewals. The question is, whether there is a sufficient justification for that, i.e., failures happen often enough to have a negative impact on Let’s Encrypt users. I dare say that this analysis builds a case for such external monitoring.

Let’s Encrypt Boulder — the technology powering the certificate management is new — the GitHub repository shows first commits at the very end of 2014. When you combine this with the rocket growth of its utilization and the number of certificates it manages, you do expect frequent updates of the software.

Multiple updates are stacked so that the chart above shows the number of minutes reported as spent on updates every month. The records of Let’s Encrypt status show that its team aims for regular updates to be done on Thursdays at 5pm GMT. While I can see mostly weekly intervals, one or two “cycles” were skipped occasionally. Most of the updates were successful as I counted only 3 rollbacks during the 20 month period.

An important observation here is that updates benefited from the HA configuration of Let’s Encrypt validation and issuance servers. Updates are described as “rolling” updates where the second server was only updated once an update on the first server was successfully completed.

What I find interesting though is that regular updates represent the only circumstance, where the reliability of Let’s Encrypt benefited from its two server configuration. Almost all incidents impacted both production data centers. I find it remarkable if that was really the case in terms of the quantitive impact of incidents as well.

Now, when I say full, I’m not at quite sure whether particular incidents were complete service disruptions. I did my best to separate partial and full disruptions, and I believe the results presented below are good enough for deriving some conclusions about the reliability of Let’s Encrypt.

Multiple disruptions per month are stacked. The time is shown on a logarithmic scale!

As the chart above uses a logarithmic scale. As it's not straightforward to convert minutes into the uptime, I also add a cumulative graph, which gives a better idea of the system reliability as usually measured. The red dotted line indicates overall uptime in % from the beginning of 2016.

There seems to have been several incidents with a significant impact on the overall reliability figures, but overall, the uptime has stabilized just under 99.9% in the last 6 months of the operation.

That means that at least some users of Let's Encrypt experienced uptime of 99.9%, however, if you were very unlucky, the actual uptime you experienced was much lower.

Partial disruptions are incidents, which were detected via increased occurrence of errors, or when some of the Let’s Encrypt users mentioned issues with certificate issuance.

It’s not surprising that the total duration and the number of “partial downtime” incidents are larger than for complete disruptions — you can notice that the chart above goes one order higher, even though it again uses a logarithmic scale. As a result, the overall up-time here was at around 98% at the end of September 2017. If you wonder what it would look like if we skipped the big incident in May 2016, the final up-time would go up to 98.8% in 2017 only.

One issue I didn’t expect was down-times due to infrastructure problems, problems outside the core Let’s Encrypt systems. My expectation was that these events would not exist, or at least would stay hidden away from users thanks to the HA design of the system. Still, network disruptions, firewall incidents, DNS misconfigurations, and similar issues did happen and caused partial or even full disruptions of LE services.

When I started, I expected the reliability of Let’s Encrypt to significantly improve after first 6 months or so. It doesn’t seem to be the case and service disruptions seem to occur regularly over the whole analyzed period. Having said that, the uptime keeps improving, but it’s a long way from 99.99% or higher, which you expect from commercial certificate providers.

The data also indicate that Let’s Encrypt doesn’t really gain as much benefit as I’d expect from its high-availability configuration. Incidents usually show that both data centers with the certificate issuing service are impacted at the same time. Related to this are also several incidents when a bug in the software was discovered either during updates or shortly after — possibly indicating deficiencies in testing. 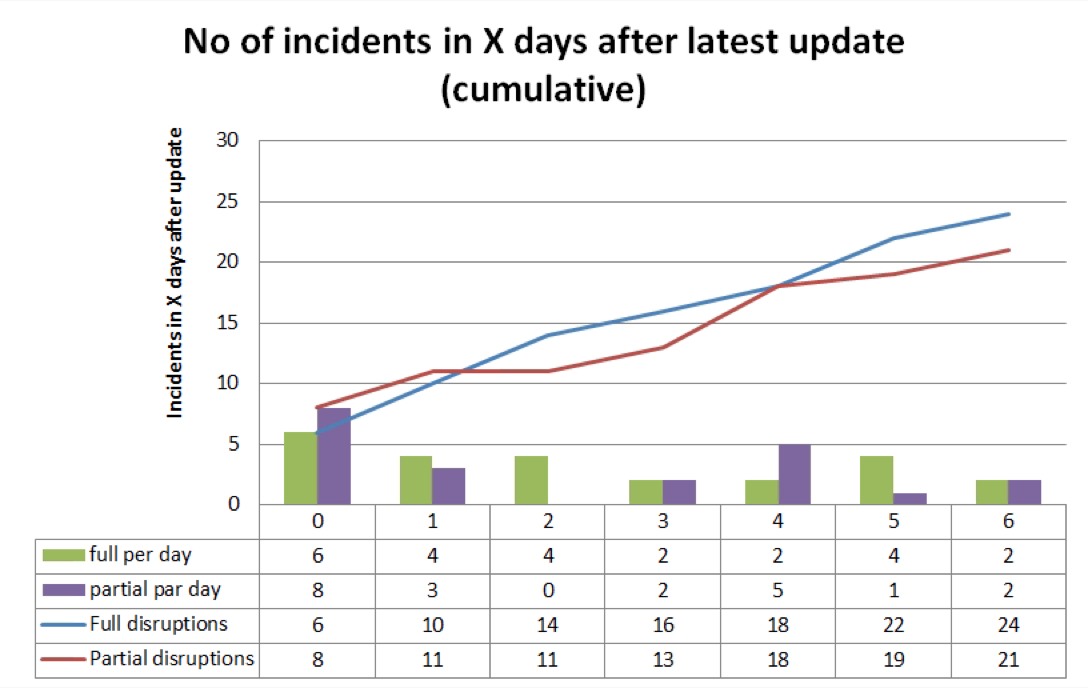 Based on the previous chart, I wonder if LE should consider some changes to the way updates are executed and possibly if it is possible to strengthen the testing of new versions of the software, like:

A pleasant surprise was the reliability of the OCSP service. The downtimes were limited to infrastructure issues (networking, server time synchronization).

Having said that, there are many users who don’t benefit from this service as Chrome and Safari browsers don’t do OCSP checks. This may get better with OCSP stapling. However, there are several practical operational aspects one should be aware of:

There were 2 significant OCSP outages in the last twelve months, they lasted 2+ and 9+ hours.

Initially, I thought that LE may need to re-configure the back-end system, to further minimize common infrastructure, to increase the overall reliability of the service, but I’m not sure whether it would have a significant impact. At the moment, it seems to me that most disruptions can be prevented on the software level. This is an expected situation for a new system, still under significant development.

A note about monitoring

I have been, and still am arguing my strong belief that external monitoring, which checks the outcome (a server with valid certificate), rather than the renewal procedure (like whether a certain process or a hook been started or invoked) is crucial for a reliable use of HTTPS / TLS. It's not good to secure data between your web server and your users when there's no data to have due to an expired certificate. We need a technology, which support the purpose of the internet.

That’s why we developed KeyChest.net and that’s why we offer it for free to anyone, who tries to do the right thing and use HTTPS.

The whole process of renewing a certificate includes a large number of components and a small change in any of them may cause a failure of a certificate renewal. Whether it is an update of a Let’s Encrypt client or a change in the validation of requests. An example of the latter was a change in the IP protocol preference from IPv4 to IPv6. Some LE users realized way too late something went wrong, with their internet service providers (ISPs) to blame in some cases. One wouldn’t expect an ISP to have a role in renewing LE certificates, but if they haven’t completed or tested their IPv6 configuration, LE validations failed, HTTPS certificates didn’t renew and web and application servers went down.

This is actually an aspect I didn’t have on my initial list, but it is an interesting one if you are interested in building or operating your own high-security service.

The main document, which describes how Let’s Encrypt operates is a Certification Practice Statement (ISRG CPS v2.0). While this document mentions physical access to the Let’s Encrypt systems, it doesn’t really cover remote access, which I suspect is the primary way of accessing servers for updates, maintenance, etc. It is also an important aspect of the security of signing keys.

I expect Let’s Encrypt certification authorities (CAs) to use network hardware security modules (HSMs) to provide physical security of signing keys. HSMs’ role is to prevent keys being leaked and copied off-site. The very next threat is for the keys to be used without authorization as today’s HSMs are network devices and their API can be used remotely.

I looked at the period of January 2016 to mid-September 2017 and Let’s Encrypt lists over 150 events in this period, with only a small number related to components outside the boundary of the core LE infrastructure. This means that the ops team accessed the production systems almost twice a week (every 4.2 days). A lot of visits or remote connections to a service, which is supposed to show maximum possible security.

The security of the remote access and the strength of authentication, authorization, and access control are thus absolutely crucial. The network security is just as important as the ability of access systems quickly to resolve incidents. There is little information available about the remote access to Let’s Encrypt data centers and I would really like this to change.